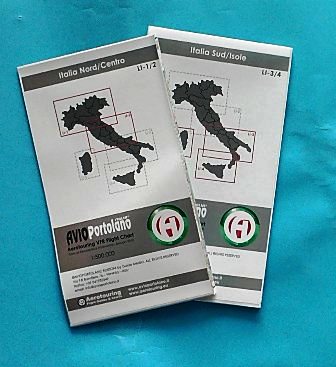 The entire country of Italy is printed on only two front/back flight charts (North/Central and South/Isles) and cut into a minimal format for an easy consultation on board.

The altitude information has been presented in the form of altitude curves and barometric colours so as to provide the pilot with an instant and accurate visual reading of the lie of the land, and the altitude bands that identify the plateaus, hills and mountains clearly highlight the valley areas.

The chart reflects the location of all the airports and private airstrips, including those that are not shown in the AIP Italia, together with individual identification codes assigned to them by Avioportolano, the details of which can be found in the Italy Aerotouring Flight Guide 2010/2011. Particular attention has been paid to essential basic information.

The special icons enable the pilot to immediately identify Aerotouring Landing Points that offer certain facilities (overnight accommodation and restaurant facilities), as well as technical landing points and the main services available at the various airstrips, focusing particularly of the availability of fuel and any notification requirements prior to landing. In addition to the various airspaces, the chart also identifies areas of restricted airspace and areas where there may be ULM traffic or free flight activity, as well as nature parks and protected fauna areas.

As regards the general geography, particular care has been taken with information relating to densely inhabited areas. Certain point and linear features (towns, roads, railway lines and rivers) were selected on the basis of their relative importance and visibility as ground reference points for visual navigation purposes, and on the basis of their importance in terms of tourism, culture and the environment.